more info for the public from your commissioners 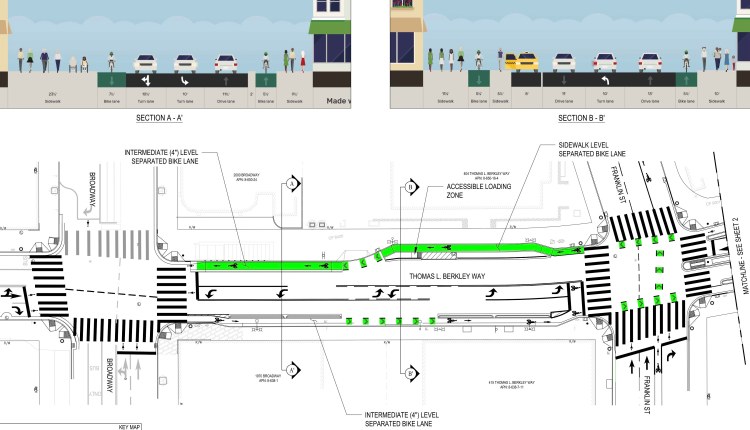 At the July 16, 2020 BPAC meeting, Craig Raphael, Senior Transportation Planner in the Capital Finance Section, requested letters of support for two grant applications that are being prepared for the Safe Routes to BART Grant Program: the 19th Street BART to Lake Merritt Urban Greenway ATP project and the E 12th Street Bikeway project.

This project proposes upgrading the existing bike lanes on 20th Street (Thomas L. Berkley Way) from Broadway to Harrison Street—Lake Merritt. The upgrades include separating the bike lanes with barriers and adding dashed markings in the intersections.

On the north side of 20th Street at 19th Street BART station between Broadway and Franklin Street, the bike lane would be raised at sidewalk level (aka a cycle track) and painted green. At that section, there is no car parking except an accessible loading zone, which includes a curb ramp at the middle of the block. The bike lane would have dashed green “conflict zone” markings there, as well as at driveways.

This project proposes a bikeway on E 12th Street from 35th Avenue at Fruitvale BART station to 54th Avenue. The bikeway includes different bikeway designs depending on the street context. The concept plans are below.